“If freedom of speech is taken away, then dumb and silent we may be led, like sheep to the slaughter.” ― George Washington

On a blue lagoon surrounding with lush green Paradise Island, there is a cute six years old girl, Marlear. She’s a happy little girl. Marlear likes to play with other kids her age.

It’s Marlear first day at school. She is so excited and couldn’t wait until she gets to school. She’s smiling ear to ear. Marlear wears her brand-new uniform, pink bows in her neatly combed hair with a matching pink backpack ready on her back. She’s a doll!

Off she goes with her parents to the only school on the island. They walk her to the classroom, then they leave.

Marlear is having a fantastic time so far in her class. The bell rings. It’s break time. She goes outside to play with a group of kids on the playground. She notices something strange starting to happen. She cannot understand why.

A little boy is picking on her. “Hey, I’m talking with you, how come don’t you answer me. Why? Is a frog got your tongue?”

Soon other kids join him. Now, Marlear is surrounded by kids about her age. They’re making funny faces at her and push her to the ground while Ms. Tina, the teacher, is helping another kid.

Little Marlear furiously gets up and pushes them aside! She cries and runs to the restroom! She stands right in front of a mirror and stares at herself. Then Marlear opens her mouth and looks into it like a doctor is examining her mouth. Everything seems to be normal to her.

In frustration, little Marlear runs out of the bathroom to Ms. Tina! She grabs Ms. Tina’s hand. Marlear opens her mouth and points her tiny finger to her mouth. She asks Ms. Tin to look inside her mouth while tears are still rolling down her cheeks.

Ms. Tina closes Marlear’s mouth and gently wipes the tears off of her red cheeks. She gives her a big kiss on her forehead. Then she hugs little Marlear long and tightly.

Marlear is a precious mute girl. She has a speech impairment and cannot speak a single word for the rest of her life.

Then there is a different story about Anikar who has no speech impairment. However, she is suppressing from expressing her opinions whether she is at home or when she’s out in public. Anikar can only say, “Yes,…” or simply “No,…” when she is being asked.

For the rest of the time, Anikar is told to keep her mouth shut. If she doesn’t, she would get punishments. One form of punishment is physical abuse. Or it could be worse. Her oppressor could kill her and/or her family. 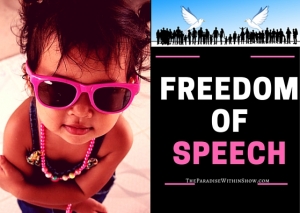 There are many other people similar to Marlear and Anikar stories in this world. They are being muted by circumstances either due to personal families, workplaces or political oppression among others. By muted I mean some form of freedom of speech oppressions. They have no freedom of speech.

Many of us are blessed and grateful that we’re not facing in either circumstance. All of us should learn to be a little more considerate, learn to listen to other people more, and learn to stand up for ourselves and for those who are too weak to stand up on her own..

Freedom of speech might not be on the list of your freedom to enjoy life fully alive as you might not have it taken away from you. Nonetheless, it’s extremely important to have the freedom to express our thoughts in your life daily.

I’d lived a communist regime, so I know what it’s like to be muted. And I’d had work in corporate world to know enough about office-work politic.

“At no time is freedom of speech more precious than when a man hits his thumb with a hammer.” ― Marshall Lumsden

How would you feel if you’re forced to choose one: Mute at birth or muted by circumstances for life?

A part of living life fully alive is to create the paradise within. That is to have freedom of speech.