6 Greatest Gifts A Dad Wants From His Child

Have you thought what gifts to give that your Father wants the most?

I’ve seen so many fathers have been incredibly happy when they received these gifts. The gifts are applicable to fathers anywhere in the world, age and time.

Before you roll your eyes and say:
“My Dad has everything!”
“I cannot afford to buy him anything.”
“He’s a grown-up man. He can get them himself,” and so on.

These gifts don’t have monetarily labeled on them to make him feel good.

This is a story about a father named Tom.

Back in the old days, Tom was a blue-collar worker. He committed to himself that every one of his children would be well-fed and happy. They would be successful when they grew up.

Tom was very busy making money to provide for his family, so they would never ever experience a day of hunger for food like when he was young. They had a warm and loving place they could call home.

He left the house to go to work before sunrise and got back home when his children went to bed. He only got one day of the week and on the major holidays. Being a man who loved his children and family and the man with a strong ego, Tom never complained about his work or how tired he was.

Fast-forward to today, Tom is in his late 70s with hair, wears glasses and has grandchildren. All his children are very successful. They have their own families and have homes of theirs. His kids have been good to him and his wife. They send stuff to them via snail mail. He rarely sees them in person, except on major holidays. 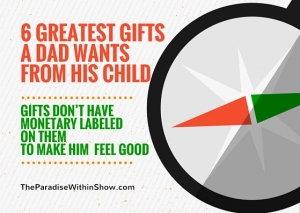 What does it mean to you? Simple. Tom could be similar to your own father. Tom has been yearning to receive the gifts. He is often sitting by a window looking outside and wishes that his gifts would arrive at any time:

1. Forgive – No one is perfect as we know. If he made bad decisions in the past, learn to forgive him. You don’t do it for him. When you forgive him, you benefit more than him.

2. Love – Sometimes we tend to forget that when Dad gets older, he needs less or does not need affectionate emotions as a father-child relationship. In fact, it is the opposite. He knows that his time is getting shorter each day he lives, so he yearns for little more emotional support.

Yes, just like we wanted love from our fathers when we were kids, they too want love from us. He wants to hear and knows that he is loved by his children.

3. Caring – Give a call to say hello to your father. Write him a letter. Send a postcard. Send a text message if he is technology savvy Daddy. Show him that you care for him. Some fathers just hold on to his affection very close within his heart and don’t show to his family.

5. Gratitude – Express your gratitude for everything he has done for you. That he had the gut to stand by you and raised you. He worked hard and long hours with calluses on his hands and feet to put food and shelter for you and the entire family to live in comfort.

6. Your Time – Just like when we demanded our Fathers to spend quality times with us when we were little kids. We didn’t know any better that Dad had a long rough day at work, tired and wanted time alone. We still wanted Dad to play with us. In old age, most fathers want to spend some quality time with his children and grandchildren. Although most would not express it out loud.

Ask him what the family situation was like when you were young. I bet there are stories that he never told you before what he sacrificed for you as his child. Spend time listening to their stories. Some days the light will go out and the voice will be silenced. And he won’t be able to tell you a story.

“When a gift is deserved, it is not a gift but a payment.” ― Gene Wolfe, Shadow & Claw

On a side note, some of you didn’t have a positive father-child relationship for many reasons. If you are a father, you had devoted and sacrificed your life to raising her, so she could have a better life. But somehow your relationship with her turned sour.

If that is the case, know that your effort doesn’t go in vain. It’s not your fault if you had done everything that you could within your power at the time. You should go on living each day without regrets knowing you had done your best as a father.

Both sides should practice open communication. For example, ask your Dad what he wants.

And Fathers: Please be brave and let your children know what you really want from them.

You might feel overwhelmed if your father and you have not been showing emotions before. If you are a father, you give her some time if you don’t hear from her immediately. It does not mean anything negative. It could be that she doesn’t know how to react. She could be busy trying to figure out what is best to do and sorting out her time.

In my final thoughts for Father’s Month, it’s time for the fathers (mothers too) to receive. There are people in this world who wish to have a father alive at this moment. I’m one of them.

And there are men who wish to be a father, but their wish is not being granted.

Cherish your relationship with your father. You are among the luckiest people in this world.

To all the fathers, straight, gay, biological or surrogate and any form of fathers that I might miss, who fathered your children through thick and thin times, you are AWESOME! Congratulations! You deserve an Awesome Father Award Achievement.

A part of living a fulfilling life is to create the paradise within. That is to honor and return the gifts to our fathers.