During this week of “The Vegetarian 100 days challenge week 10”, my temptation for food was pushed to its highest level.

This is IT! I give up, surrender, throw in the towel or whatever you say. I cannot go on for another bite without meat or seafood. I’m sick and tired of being a vegetarian!!!

Just so you know the following excerpt is from Wikipedia:

April Fools’ Day (sometimes called All Fools’ Day) is celebrated every year on 1 April by playing practical jokes and spreadinghoaxes. The jokes and their victims are called April fools. People playing April Fool jokes expose their prank by shouting April Fool. Some newspapers, magazines, and other published media report fake stories, which are usually explained the next day or below the news section in small letters. Although popular since the 19th century, the day is not a public holiday in any country.

Now, let’s get into the real subject…

I like to eat fish.
Could you guess what were my bats?
Not shrimps.
Not catfish.
Not chicken either.

They were Poki bowl and sashmi! It was at a SUSHI restaurant!

I’ve avoided going to any sushi restaurant since I’ve been on the vegetarian diet.

How did I ended up being at a sushi restaurant this week?

Well, I didn’t know we were going to sushi place. Until we were exiting the freeway to go the restaurant.

We were on our way to visit Flower Fields in Carlsbad, CA.

There is a very popular Japanese, a hole-in-a-wall place. They make only limit amount of food to sell each day. Usually they are sold out within a few hours.

We wanted to stop by and to have our lunch before heading off to the flower fields. When we got there, people stood in line already before 11:30 AM.

The Poki bowl literally had me drooling!

What did I ordered? 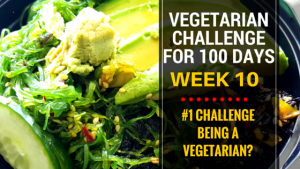 I had vegetable bowl! I never ordered vegetable ever when I went for sushi.

Seaweed salad was the best one I’d ever tasted! I put my foot down and said no to Poki mixed sushi bowl!

That was very tough! It was like pulling candies from a child’s mouth.

Then there was the birthday party I had to attended. Oh, that was also tough.

You know, I’m finding out that the #1 challenge is when I’m the only vegetarian who have to look and smell all the meat dishes.

What did I had at the party?
I mixed vegetables and rice vermicelli with sauce and dipped the barquette with lime joice, salt and black pepper sauce. It was surprising good! You should try it.

THE STATE OF MIND:

Honestly, I came very close to losing it to the temptation. Being out at social events where only meat is served for the meal is my biggest challenge so far.

I’m one of those people who don’t like to complicate anyone or myself. Just eat whatever is served. But usually the options are hardly anything to choice from.

Before I go to any social events, I don’t depend on eating a full and satisfying meal. I don’t expect much, so I’ve not been disappointed due to the lack of vegetarian dishes at any parties.

Going through this makes think about people who want to stop their addition.

If the individual does not have a strong will to reach the end goal (WHY) and fight off the peer pressure or whatever her enemies are trying to stop her, she could be simply convinced to go off the route.

My energy level is normal. I don’t feel tired or have so much energy that it could send me through the roof top either.

I feel my body is light and clean as it has been in the last few weeks.

WHAT IS ON MY MIND?

I thought seeing and smelling food were very tough to decline. What is more challenging is when seeing, smelling and being at social events are combined.

That is serious mind triggering, alluring and enticing games! If people want to stop their addictions whether it is smoking, alcohol, drugs and so many more, they have to stop being around and associate with anyone who is doing just that.

What if they don’t have anyone?

Learn to be alone and find groups of people whom they can associate and support them.

A strong mind with the ability to distinguish between the Pros and Cons of the actions being taken at present time is the must have for any person to overcome unwanted emotional desires.

What is the one bad habit that you’ve been wanted to change, but you haven’t done it yet?

Do not wait as you may not have the time to do anything later.

Now is a good time to change while you can and have the control over it.

That is no April fools’ joke!

Will I be able to resist the food temptation and make it to week 11th by not eating meat and seafood for 100 days until May 2nd, 2016?

Stay tune for next week update.