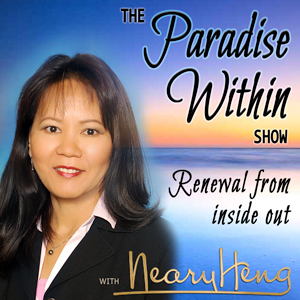 The Paradise Within Show Podcasts

How They Found The Paradise Within

Subscribe and Listen to The Paradise Within: Renewal From Inside Out Show❣

Like you, Linda Patten, who was a former Four-star General in The U.S.A Army, is more than just the role of woman, wife, mother, business owner, crafter and more.

In 2008, her world began to crash and burn. In the rush and demands of being a business owner with, at that time 3 divisions of her business, Linda had put her dreams in a really nice box, tied it with a beautiful ribbon and placed it on a shelf in the back of her mental closet, never to be seen again.

Later, Linda and her husband decided to downsize drastically by selling our 3700 square foot home of 18 years and moving into a 940 square foot apartment.

Their offices once again moved to commercial space, and they were together in this healthy environment. This was also the time Linda was introduced to two companies that have had her takes a look on that shelf, pull the box down, unwrap it and re-envision those dreams.

“Dare to dream” Within Moments:

If you find this episode resonate with you or if you know someone who might benefit from listening to the show, please share it. They will thank you for thinking of them.

Neary Heng empowers busy entrepreneurs and professional women to become friends with their fears and insecurity, so that they reclaim their health, time and freedoms while loving who they are truthfully in harmony. Contact Neary Heng at NearyHeng.com/contact.