Have You Ever Felt Embarrassed Eating Your Meal?

Have you ever felt embarrassed eating your meal in front of other people?

Have you been teased, made fun of, ridiculed, harassed by someone because of what was in your brown bag?

Maybe you were a subject of lunch time joke by your classmates when you were kids in school because of what your Mom packed for you in your lunch-box. Or perhaps you are feeling uneasy because the meal you bring to work isn’t “normal” to your co-workers.

By not “normal”, I mean the typical bread and butter, hamburgers, spaghetti, salad, sandwiches and the types of foods are being sold at fast food joints and restaurants. The foods that are known to many people who live in the Western culture.

Because of the bad experience or the perceptions you have, you are inclined, embarrassed and avoided eating your very own ethnic healthy cousin that gives so much pleasure and joy.

After all, food is essential part of our lives. I LOVE different delicious healthy ethnicity cousins. I believe you do too.

Once upon a time when I was new to this Western culture, there weren’t many authentic foods available.

There were no banquettes bakeries which many people like to eat.

If you are like me, I didn’t grow up eating the typical Western foods. And that could be challenging. Flavors just tasted weird and didn’t smell right.

Milk tasted salty and strange. Avocados had the mixture of MSG and salt flavors. Cheese and Parmesan cheese smell rotten. Honestly, I thought they must be expired and spoiled.

Do you get satisfaction eating a meal you are used to eating?

I don’t get satisfy after eating a Western meal. I feel like something else is missing. It’s like eating a filet mignon, but with only a mashed potatoes and a piece of asparagus without the filet mignon. Or you have spaghetti with no sauce, meatballs and Parmesan cheese.

Some people don’t bring their lunch from home to work. They go out to buy it during the lunch break. Some people view this as “cool” thing.

They think that by bringing a meal from home to eat at work during lunch time isn’t “cool”. If someone brings a lunch, she/he is labeled as cheap, anti-social etc.

There was a higher up manager who was considered to be one of the brain-powers within the company. He never brought a meal from home to eat at his office. Never! He said in his position and with his title, it looked tacky to bring a brown bag from home and eat in the office. He bought lunch every day whether he was in the meetings or not.

I can totally understand his conscious perceptions what other people think of him.

From the opposite spectrum of him, when I started to work in Coperate America, I was hesitated to bring my own lunch too. Hardly anyone brought their lunch to work.

However, I was very quick to remind myself that I must be grateful that I had food to eat. From then onward, I didn’t care to be perceived as “cool”.

So out with “not cool stigma”, in with my brown bag prepared by the best cook, my mother.

Take this kabucha or pumpkin flowers and young vines as an example. They could be made into varieties of authentic delicious Cambodian dishes. 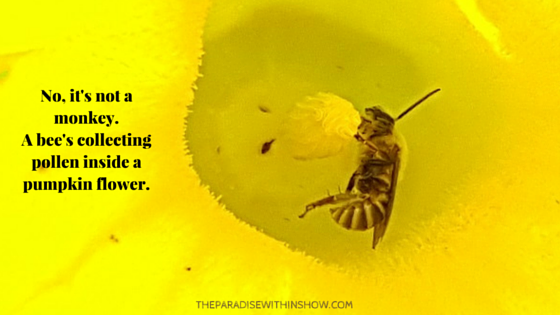 However, some people are embarrassed to admit that they like to eat or eat it for many reasons. Where I grew up, it is considered as poor people or farmers food. Society judges farmers as poor, lower class, uneducated and anything along those lines.

If you think this does not make much sense, you are right!

I must admit that I’m grateful that I’ve experienced and grounded in both lifestyles: The city and country.

When I told people who are still living in Cambodia and in American that pumpkin flowers and young vines sour soup is one of my favorite dishes, some of them were surprised.

It’s not the food that you eat that makes you rich or poor. It’s what you are feeding in your head; it’s your thinking; it’s your mind set.

For over 20 years, I’d a craving for the sour soup, but it wasn’t available at the markets. It was one of those things even when you have money, you cannot buy it. Yes, sometimes we treasure what we no longer have.

I’d never thought that I would missed it so much. It was so common back in Cambodia. However, it’s rare here to plant it.

For many years now, Mom grows it yearly and shares the sour soup with her friends and strangers at the temple. Some of whom they got to savor it for the first time. They were shocking surprised how a simple poor people soup was so delicious.

Eat what you like to eat. Forget about what other people would like to see you eat!

BENEFITS OF HAVING YOUR OWN BROWN BAG:

Avoid food allergies – I usually feel bloated and very uncomfortable after eating a certain type of food. I don’t like that feeling. Don’t you hate it too?

I don’t want to tolerate it or have to take medications to alleviate symptoms.

If you hate the peas so bad, for example, you don’t eat the peas. So why do you force your body to take something that it hates so much?

Save time drive around – It wasn’t cool to bring my own lunch when I had to buy lunches. I don’t know about you, but I wasted more time driving around deciding what and where to eat. Then I had to rush. By the time I was done eating, it took me longer than one hour.

After a few times, I brought my meal to work, except when I had groups’ lunches.

There were a handful of people who enjoyed eating lunch at work as I did. At first, some people asked me what was in my lunch. I didn’t mind telling them and asked them to try it. Usually I brought “safe” dishes, for example stir fried vegetable and soup. I rarely packed fish for lunch. It could be deadly smell to some people who don’t like fish.

So don’t be embarrass are ashamed to eat your own ethnic food.

However, there is one except. Please be consider of other people around you who different ethnic from you if the food has unpleasant smell. While you enjoy your food, other people shouldn’t have to suffer.

You see, most companies typically give their workers one hour lunch break. If I took longer than one hour of lunch break, then I had to stay back to make up for the long lunch hour. I was fortunate to work for companies offered flexible hours and a few understanding managers. Some companies don’t offer flexible work hours to their employees.

You know what go into your own food – If you bring your own healthy meal, you know what goes into it. Not everyone is a good cook and has time to cook.

Long term health benefits – If by going out to buy your meal at joined fast food places makes you feel “cool”. Take a look and weight these options out careful.

What is wrong this perception? Many fast food joints do not serve quality healthy foods.

Eating a healthier meal is your obligation. It is something you have control over.

Other people perceptions of you, you have no control over them.

The choice is your: Illusion perceptions or your health? 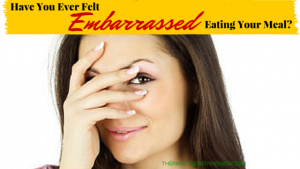 In recent years, it becomes what was “not cool” is now “cool”.

I was glad to witness the shift of a few people sitting in the power positions (executives) brought their favorite brown bags to enjoy at work. They made the conscious decisions to better their health. They were probably aware how Steve Job is spending his fortune right now.

Saves you money – If you could afford eating out healthy meal all the times, then exercise the option.

Spending more money on the meal at expensive restaurants doesn’t mean the meal is better and healthy. It’s important that you know ingredients and the original of the food sources.

It’s easy to spice up anything, but the original forms (fish, meat, vegies etc.) cannot be changed.

Today where I live, there are all sorts of varieties of very delicious authentic ethic cousins are being served. They are ranging from fast food to-go to fine dinning sit down restaurants.

I could literally walk within a few miles radius to any restaurants and enjoy a delicious meal that I could not imagine of having it many years ago. There are Greek, Mexican, American, Indian, Korean, Vietnamese, Chinese, Taiwanese, Filipinos, Italian, Japanese and more. And of course Cambodian cousin prepares by a VIP chief, my Mother.

So many people are now aware of the different kinds of ethnic cousins. Some people are adventurous, brave and try them out. Some of them fall in love with the cousins which they once thought were strange.

Nowadays, I like avocados and a good piece of cheese sometimes. Yes, cheese still stinks, but it’s tasty though :-).

Whereas some people gave the cousins a try, and they swore they won’t touch or smell that “thing” over their dead bodies. We are uniquely differently.

Savor the foods that you like and are healthy for your body. Don’t let other people perceptions feed down your throat and make your head grows fat.

In the end, you free yourself from adding more pounds you don’t want, a few arteries blockage, expensive medical bills or it could be a lot worse.

Then, who is laughing?

Food alone can be very strange. People have many stranger exceptions and could be very conscious of what others think of them.

Wouldn’t it be nicer and better if you give a little consciousness to yourself?

A part of living a fulfilling life is to create the paradise within. That is to get rid of the illusion stigma in this moment.